Marbach Castle has a long history to look back on, a history one senses immediately. Being in a place with a rich perspective of the past undoubtedly helps when it comes to shaping the future.

2021 The extensive renovation of the castle is finalized. Tradition and modernity united at Marbach. Significantly more capacities for different seminar sizes, in addition sustainable culinary and hybrid meeting formats complete the seminar and conference center Schloss Marbach. Instead of 61 as before, there are now 75 rooms available for conference participants.

2019 Start of a historic reconstruction. The castle building is rejuvenated with respect for our valuable history. Additional capacities are created. Modern and stylish interiors, the latest event technology and innovative conference and catering concepts complement the unique atmosphere of our castle building.

2012 Hotelmanager Peter Rohner retires. For more than 22 years he has shaped and managed the Seminar and Conference Center Schloss Marbach. He has played a major role in the success story of recent years. Gerald Nowak follows as his successor and pioneer for the future. 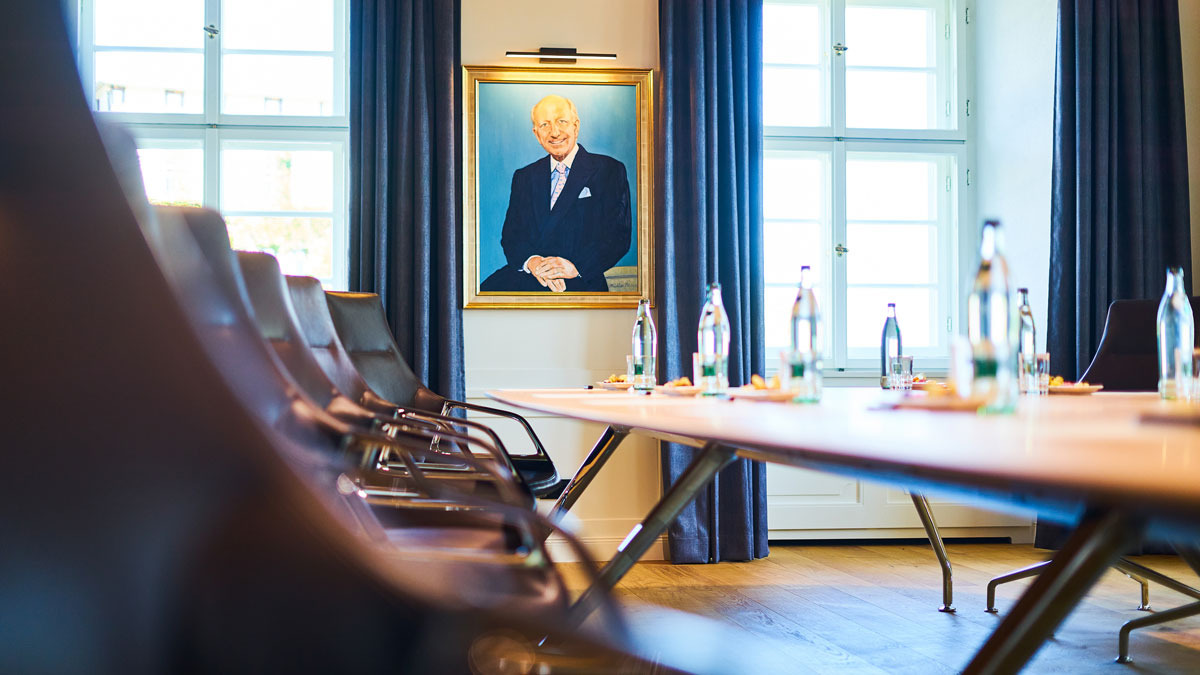 2005 The Jacobs Foundation and Barry Callebaut completely renovate the Villa Bella Vista, and add to it the new Forum building to expand seminar capacity

2004 Barry Callebaut, the world’s leading producer of cacao and chocolate products, is the new leaseholder of the entire Conference and Training Centre. But Marbach Castle may still be rented also by third parties for seminars and meetings.

1997 Bella Vista, the mansion opposite the Castle, and the area of the former rural school hostel were added to the estate.

1990 Marbach Castle was made over to the Johann Jacobs Foundation in Zurich. The modern Conference and Training Centre was opened for institutions, associations and companies.

1989 After 14 months of costly renovation work, which involved the fundamental overhaul and modernisation of the Castle, as well as the erection of residential towers, an atrium, an indoor swimming pool and several outbuildings, Marbach Castle was inaugurated as a group communication centre.

1978 France returned Marbach Castle to the German Federal Administration. The building and the 25-acre park are jointly used by the rural school hostel situated opposite and the nearby protestant boarding school, Gaienhofen Castle.

1945 After the end of the war, the French army occupied Marbach Castle and used it as a home of recovery for soldiers; the park served as a camping site

1941 The widow of Dr Lanz, who had died in 1937, sold Marbach Castle to the Reich’s tax authorities for 600,000 reichsmark. The Luftwaffe used the Castle as a home of recovery for officers.

1924 Marbach Castle burnt down to its external walls. Dr Lanz had it rebuilt, establishing a more generous layout of the interior

1919 After the First World War, during which war casualties were treated in the Castle, Dr Karl Lanz, a machine manufacturer from Mannheim, bought the estate as a birthday present for his wife, Gisela. He had the fairy-tale fountain built, remnants of which can still be seen in the park today. The figures represent the Lanz children. 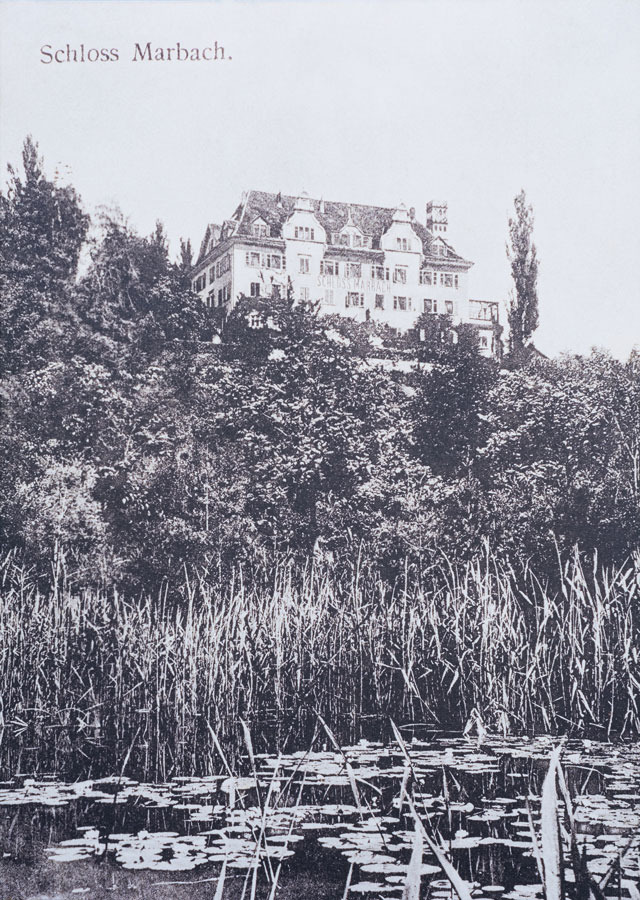 1898 The success of the health resort facilities increased the Castle’s value. Dr Oskar Hornung paid no less than 250,000 imperial marks for the Castle. The building was extended to four floors. The clinic was transformed into a joint-stock company after additional purchases of property failed to result in the desired increase in value.

1885 The Castle was purchased at a price of 40,000 marks by Dr Wieckenbach, Royal Prussian Medical Officer from Stralsund.

1880 In a compulsory auction, Marbach Castle was acquired by the Constance Municipal Savings Bank and Orphans’ Fund at a price of 10,000 marks. Four weeks later, this bank profitably sold the castle to Dr Arnold Krücke from Jena for 34,500 marks.

1863 Marbach Castle, which had been stripped of its furnishings and generally neclected, was acquired by Johann Kasper Schmid, a chemist from Freiburg

1860 Marbach Castle was thus in the hands of a speculator: Reglin sold the property to Leopold Faller, a glass merchant from Lenzkirch, for 24,000 guilders.

1859 Gallus Reglin, a merchant from Überlingen, purchased the Castle, including all the furnishings, at a price of 10,000 guilders.

1839 Count Grimaudet died in his renovated castle and was buried in Wangen cemetery.

1829 The French Count de Grimaudet acquired the estate and had it improved and embellished at great cost. Today’s foundations and external walls date back to this time. Ever since, the building has been known as Marbach Castle.

1598 Baron Kasper of Ulm contrived to repurchase the former property of his family. His son Ludwig, who held an influential position at the imperial court, obtained an imperial order whereby Marbach Castle had to be sold back to his family. After 1461 and 1570, Marbach Castle burnt down for the third time during the Thirty Years’ War. For 300 years, the castle remained in the ownership of countless members of the Ulm family, who either inherited Marbach Castle, sold it to each other or took over its maintenance.

1587 Imperial commissioners had to settle Ulrich Fugger’s debts. Marbach was returned to the Peutingers’ heirs, from whom Count Jakob Fugger, the Dean of Constance Cathedral, repurchased it.

1581 Count Ulrich Fugger, Lord of Kirchberg und Weissenhorn, purchased the Marbach properties from the Peutingers, albeit only on credit as the wealth of this branch of the Fugger family was already badly reduced at that time.

1558 As a consequence of the division of the estate, the properties of the Ulm family were split up. Marbach Castle was sold to the Augsburg patrician family, Peutinger. 1461 Owing to sheer neglect, Marbach Castle burnt down.

1430 In the course of conflicts between the patricians of Constance and the members of the guilds, Jakob II took the patricians’ side and barricaded himself in Marbach Castle. The rebellious burghers of Constance stormed the Castle and laid waste to it.

1409 Nikolaus Sattler sold Marbach Castle to Baron Jakob I of Ulm, who came from a noble Constance family.

1387 One Nikolaus Sattler of Ravensburg purchased Marbach Castle after Mangold of Brandis’ death and acquired the Kehlhof estate a year later. Marbach Castle and Wangen were in one man’s ownership for the first time.

1384 Mangold of Brandis, now Abbot of Reichenau and Bishop of Constance, had Marbach re-erected.

1369 Constance merchants sailed up to the Castle in 18 boats. 400 men stormed the defences and burnt them down. Nine armed men alone defended the Castle successfully for some days, but then surrendered and were beheaded in Constance.

1365 From this strategically well placed position, Berne’s Barons of Brandis conducted raids, particularly on boats on the Rhine, so that this important trade route from and to Constance collapsed. Marbach Castle was an iniquitous den of robber barons, in which the burgomaster of Constance was kept prisoner for a long time.

1291 The Castle, which is more likely to have been a fortress at the time, was first mentioned in 1291, in the Chronicle of Reichenau Monastery. Abbot Albrecht of Ramstein witnessed: in castro nostro quod Marbach dicitur – in our castle, which is called Marbach.

Headquartered in Zurich, Switzerland, the Barry Callebaut Group is the world's leading manufacturer of high-quality chocolate and cocoa. We are the heart and engine of the chocolate industry and our mission is to be number one in all attractive customer segments. We are a business-to-business company, fully vertically integrated with a strong position in cocoa-origin countries.